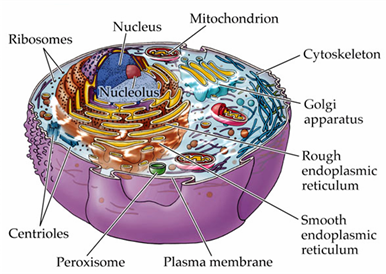 Re: GAMSAT Biology The Cell
Cell theory
The cell theory explains the observation that organisms are composed of cells.  This theory includes the following three principles:

1. All organisms are made of one or more cells. Life processes occur in these cells.

2. Cells are the basic units of organisation in all organisms.

3. A cell can only arise by division of a previously existing cell.

Cell size
Cells are relatively small for a number of reasons related to diffusion in and out of the cell. A small cell is advantageous in terms of the surface area to volume ratio. A smaller, flatter cell with a large SA:V ratio will be more efficient in diffusion and removal of wastes. As a cell gets larger its volume increases at a faster rate than its surface area (lower SA:V ratio). A larger, rounder cell will have less efficient diffusion and removal of wastes.

Visualisation of cells
Many cells are not visible to the naked eye. In order to visualise the microscopic cells we need to use microscopy.

– First lens focuses image onto second lens. Image is magnified and the image is focused on the back of the eye.

– Able to resolve structures that are at least 200 nm apart.

Electrons have a much shorter wavelength and an electron microscope that uses electrons (instead of visible light) has 1000 x the resolving power than a light microscope.

– Electrons are amplified and transmitted to a screen. A 3D image is produced.

Chemical stains can be used to increase the contrast between different components of the cell. Some structures either absorb or exclude the dye and this produces contrast that aids resolution.

Cell structure
There are 4 major features that all cells have in common. These include:
Nucleoid or nucleus: Genetic material is located here.

Cytoplasm:
The cytoplasm is the semi-fluid matrix that fills the interior of the cell. The cytoplasm contains all of the amino acids, proteins and sugars that are essential to the cell.

Types of proteins in plasma membrane:
– Transport proteins: Help ions and molecules move across the plasma membrane. Movement occurs either in or out of the cell.

– Receptor proteins: Bring about changes within the cell when the receptors come in contact with molecules such as hormones.

In prokaryotes the enzymes, DNA and other cellular constituents are not membrane-bound like they are in eukaryotes. Instead they have access to the entire interior of the cell.

The two main domains of prokaryotes are bacteria and archaea.

Bacteria: Bacterial cells have a cell wall that consists of peptidoglycan. The cell wall maintains the shape of the cell, protects the cell, and prevents excessive loss or uptake of water. Bacteria can also have an extra protective capsule that surrounds the cell wall.

Remember: Bacteria are often susceptible to antibiotics because the antibiotics affect the constitution of the cell wall.

Archaea: Archaea are difficult to culture and thus have not been studied in detail. Archaea have pseudopeptidoglycan in their cell wall.

Some prokaryotes have rotating flagella that enable movement. Flagella are protein fibers that extend from the cell and some cells may have one or more of these.

Eukaryotes
Eukaryotic cells are more complex than prokaryotic cells. They contain organelles that are membrane-bound structures that form compartments. Biochemical processes take place within each compartment.

Eukaryotes have a nucleus that contains DNA. DNA is wrapped into compact units called chromosomes within the nucleus. The nucleus is responsible for the synthesis of nearly all proteins in the living cell.

Most eukaryotes have one nucleus, but some fungi may have multiple nuclei. A nucleolus is a region in the nucleus in which synthesis of ribosomal RNA is taking place.

Chromosomes are composed of chromatin (DNA and protein complex). The DNA is wrapped around histones to form a nucleosome.

Eukaryotic cells have a cytoskeleton, which is an internal protein scaffold.

The rough endoplasmic reticulum is the site for protein synthesis. It is studded with ribosomes and synthesises and modifies proteins.

The smooth endoplasmic reticulum lacks ribosomes, but still has multiple roles. It is involved in lipid and carbohydrate synthesis.

The Golgi apparatus sorts and packages proteins. It receives vesicles from the ER and then modifies, repackages and transports them.

Lysosomes are also components of the endomembrane system in eukaryotes. They contain digestive enzymes that break down molecules and recycle the components of old organelles.

Chloroplasts utilise light to generate ATP and sugars. The chloroplasts work by capturing light energy via thylakoid membranes arranged in stacks called grana. The light is essential in the process of forming glucose.

Cytoskeleton
The function of the cytoskeleton is to anchor the organelles and support the shape of the cell. It consists of crisscrossed protein fibers. The cytoskeleton can also help move materials within the cell.

Cell Movement
Flagella and cilia aid in the movement of the cell. Flagella arise from a basal body and cilia are shorter and more numerous than flagella.

Fungi
Fungi are eukaryotic organisms. They can be unicellular (yeast) or multicellular (filamentous fungi – mushrooms). Fungi can reproduce both sexually and asexually.

Virus
Viruses are very small obligate intracellular parasites. This means that in order to replicate their genetic material and thus multiply, they must be inside a living cell.

Viruses are considered non-living as they have no cellular structure and cannot carry out their metabolism independently.

Viruses may have DNA or RNA as their genetic material, but they cannot have both. The genetic material of a virus is found in their protein coat, which is termed the capsid.

On a final note, if you would like some free practice GAMSAT questions click the link below:
==> Free GAMSAT Mock Exam