The GAMSAT humanities section is the first section of the exam (reasoning in humanities and social sciences). This section tests student’s reasoning abilities with a range of different types of texts. The different stimulus material given in section 1 can be categorised into 4 groups – prose, poetry, social and behavioural science, and graphical representations.

The following questions are in the category of Graphical Representations.

The vesica piscis is a shape that is the intersection of two circles with the same radius, intersecting in such a way that the center of each circle lies on the perimeter of the other. The name literally means the “bladder of a fish” in Latin. The shape is also called mandorla (“almond” in Italian). The term is also used more generally for any symmetric lens.

The mathematical ratio of the height of the vesica piscis to the width across its center is the square root of 3, or 1.7320508… (since if straight lines are drawn connecting the centers of the two circles with each other and with the two points where the circles intersect, two equilateral triangles join along an edge). The ratios 265:153 = 1.7320261… and 1351:780 = 1.7320513… are two of a series of approximations to this value, each with the property that no better approximation can be obtained with smaller whole numbers. Archimedes of Syracuse, in his On the Measurement of the Circle, uses these ratios as upper and lower bounds:

Oddly enough the vesica piscis in total form resembles a Venn diagram and is known in geometry as a “fillet.”  Note the connections, bladder of a fish, the symbol of astrological Pisces, et. al.

The vesica piscis has been the subject of mystical speculation at several periods of history, and is viewed as important in some forms of Kabbalah. More recently, numerous New Age authors have interpreted it as a yonic symbol and claimed that this, a reference to the female genitals, is a traditional interpretation. One author claims that the total solar eclipse inspires images of the vesica piscis. The ancient Egyptians practiced sacred geometry based on the shape. Architects and artists copied the solar eclipse/vesica piscis and its mathematics in their sacred buildings and artwork to reflect their religious beliefs. This ancient tradition was passed on through the centuries by the Freemasons. The vesica piscis has been used as a symbol within Freemasonry, most notably in the shapes of the collars worn by officiants of the Masonic rituals.  It was also considered the proper shape for the enclosure of the seals of Masonic lodges. The Vesica Piscis is also used as a proportioning system in architecture, in particular Gothic architecture. The system was illustrated in Cesare Cesariano’ Vitruvius, which he called “the rule of the German architects”.  Below is a 13th Century representation of “Christ in Majesty” from the evangelists: A complex combination of vesica pisces has been named by sacred geometry promulgators “The Flower of Life”: 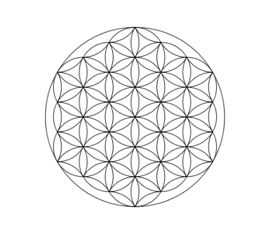 1. Based on passage information, the vesica piscis is also known by a host of other names.  Which of the following is it NOT known as?  Which is the EXCEPTION?
A bladder of a fish
B mandorla
C asymmetric lens
D fillet

2. Based on passage information, the symbol has been used in a number of cultural contexts.  Which of the following has it NOT been used in?  Which is the EXCEPTION?
A Freemasonry
B Gothic architecture
C Sacred geometry
D Surrealistic art 1. Correct Answer: C – asymmetric lens. A trick question – it is referred to as a “symmetric lens.”  All A, B, & C are not exceptions.

2. Correct Answer: D – Surrealistic Art is never mentioned in the passage, while the other answers are. A close reading or rescan will affirm this.

3. Correct Answer: D – a close comparison will indicate this to be correct.  A mix-up type of question.

4. Correct Answer: C – another mix-up type of question with subtle substitutes made.  A rescan or close reading will affirm C.

Want 8 Comprehensive GAMSAT Study Guides? Check out our GAMSAT Study Package, click below to learn more. The GAMSAT practice test inside includes 75 GAMSAT Humanities questions, which are just like the real exam!